On a recent trip to Denver, I decided to take a few days to see eastern Colorado and Nebraska.  I have to say, it seemed kinda weird the way people in Denver are all, “why would you go there?” about the whole rest of the state.  (Except for maybe ski resorts in winter.)  Denver is a nice city and there’s plenty to do.  I enjoyed Taste of Colorado, the Santa Fe Arts District, City Park, RiNo, and the Rockies (baseball and view of, as well as jaunt into).  Having said that, I’m one for seeing what is over the next hill, Tasting Colorado directly, as it were.

For the record, I liked Pueblo and the State Fair, and the State Campground outside of Hasty, and my lunch in the City Park in Brush, and the visitor center at the Nebraska State line.  Little Rocky Ford is very cute; I hope the town weathers current storms OK.  I think Pueblo in particular has some fantastic parts and the downtown has a lot of possibility, it just needs a few mid-size employers to kick things off.

One of the nice things about the central United States is that, these days, there is plenty of space on the roads.  The days of bumper to bumper congestion are gone, thanks to our non-existent economy.  I guess there’s no need for freeway projects when there is no one on the freeway.  I also enjoy the “scenic route,”—federal highways, state roads, as an alternative to the Interstate.  I can check out small towns, scanning the Main Street, locate the community institutions, read the newspaper, talk to whoever comes along.

I made my way to Ogallala, Nebraska, and Lake McConaughy by way of Deer Trail, Limon and Brush, Colorado.  I guess being from Wisconsin originally, I’m a bit picky about my lakes—I like the natural ones best.  Of course, west of the Mississippi, you have to adapt a bit and take a shoreline where you find it.  Lake McConaughy is nice and so are the artificial lakes in Colorado.  And for all that, you can actually walk right into the South Platte River, in your bare feet, smack in the center of Denver and take a picture through crystal clear water. 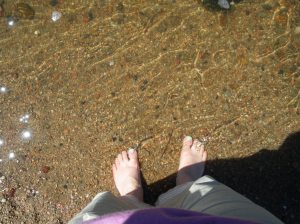 Not sure how many urban rivers have that kind of access these days.  😦

(And, yes, I do know that chicks are not supposed to post pictures of their feet, it’s a turn off, but I’m doing it anyway.  It’s part of my convention-defying persona.)

The ins and outs and politics and engineering, community safety concerns and environmental impact of Water Resources and Dam projects are *complicated* no question.  But we all have to turn it off for a day or two sometimes and enjoy what is there as well.  There really is something very nice about waking up and looking out on a peaceful lake surrounded by undeveloped landscape.

(There is also something nice about waking up and looking out on any peaceful undeveloped landscape.  And of course, there is something very nice about just waking up in the morning—as opposed to the alternative.)  To cease undercutting my own point, whatever your political view, technical background, or belief system, what’s there is there, you’re not going to decommission the dam single-handedly on a road trip, so shut it and enjoy the moment.

The area around Lake McConaughy is really very nice.  The state of Nebraska has developed a series of resources around the Lake—recreational and historic, and I learned a bit about pioneer history and the geology of the area.  Basically, it seems that part of the world (Denver east to I’m not sure how far—the Missouri? The Mississippi?) is a ginormous sand dune, with a bit of scrub brush on top of it.  Which explains why early pioneers kept going, in part.

However, it also results in some very nice steak.  😀  I really did have an absolutely fantastic steak in Ogallala, I’m drooling again just thinking about it.  Most people there are really tall, fairly thin and look healthy.  You’re not going to convince me any time soon that eating steak is fundamentally bad for you.

Ogallala gives its name as well to an enormous underground aquifer that stretches all the way down to Texas.  It almost looks like an underground Great Lake.  All that sandy soil, it just goes right through.  A lot of people, communities and food production relies on that water.

Which is what makes it so time to turn it back on, right in the Middle of trying to turn it off.  In an attempt to keep our “drive across the street to get a cup of sugar” culture going, there are *two* oil pipelines under development through this region.  Fantastic.  You really can’t blame the feds, the project has primarily been promoted by Canadian interests for the past 15 years or so, and it is finally coming to “fruition”, thanks to high gas prices and the fact that Americans are incapable of walking anywhere and that everyone in the rest of the World wants to be like us.  (Um, the American lifespan is actually decreasing, and we’re all broke.)  If this is news to you, well, it is not the environmental community.  “Greenies” have been screaming their heads off for more than a decade about the Tar Sands project, but in Space, no one hears you scream.

And all the stuff that depends on the Ogallala Aquifer?  It’s in the Middle and why does anyone live there and the food can all come from California so who really cares?  I really liked Ogallala and Lake McConaughey.  I think a lot of other people do, too.  Of course, it always shows up eventually, doesn’t it?  Anytime you have something nice, no matter how modest or minor, someone’s got to take it, or maybe just wreck it.  I hope some day, long from now, it will still be there with little Main Street businesses and a Saturday Market and really good steaks and a beautiful and blue and peaceful Lake.

Anyway, Denver, there’s a lot to your part of the World, east of the airport, south of the Air Force Academy.  Prolly the downhill skiing is not so great, but you might find something if you look hard enough.

The Dragon Lady is a life long tea drinker. Her first coffee shops were Big Boy and the Oriental Diner in downtown Milwaukee. She lives in our Nation's Capital with three bicycles and an energetic tabby cat.
View all posts by missbodie →
This entry was posted in Uncategorized. Bookmark the permalink.